THEMES OF ART AND SCIENCE

Buy Tickets for the Garden

IT IS IN THE DNA

Over 15 years in the making

DNA The basis for all life as we understand it today –  (A) adenine, (G) guanine, (C) cytosine, (T) thymine

There are two DNA pathways with double helix design and cobbled edges run from the east & from the west to the central centromere sculpture, forming the basis from which Backhouse Rossie’s garden with Themes of Art & science evolved.

You are welcomed into the unfolding story of the many generations of one family, the remarkable Quaker Backhouse horticulturalists whose legacy is being brought back to life by the current 6th generation.

Entered through an oak door, the space is divided vertically by parallel yew hedges backing wide, stone-edged herbaceous borders planted on “geopolitical grounds”. Plants from different countries are mixed in together and left to control their own borders in this art work entitled “There are no Borders Here”.

Horizontally the space features a striking pathway laid out with cobblestones in the shape of a double helix and inlaid with crushed white sea shells.

Caroline explains: “Our joint interests as an engineer and an artist, whose combined initials form the bases of DNA, became the starting point for the garden. The crushed shells are a reference to Cave 13b [where the earliest evidence for the exploitation of shellfish has been documented] and the first evidence of human endeavour were the shell people in South Africa.”

In summer the Longest interrupted rose archway in Scotland are covered by white, rambling Rosa City of York, a reference to the Backhouse Nursery, which had its origins in York. Within the south-west quarter an orchard is planted with historic varieties of apple and plum trees.

A parterre in the north-west quarter contains cut flowers, the daffodil collection and vegetables, which are grown following the principles of bio dynamics. In the grounds are the remains of a Covenanter’s tomb which agile visitors who wish to scale the two stone styles are welcome to visit.

Backhouse Rossie Estate is a personal and thought-provoking garden, reflecting the interests of its owners. Themes of art, science and family resonate in the design concepts, layouts and plant selections. 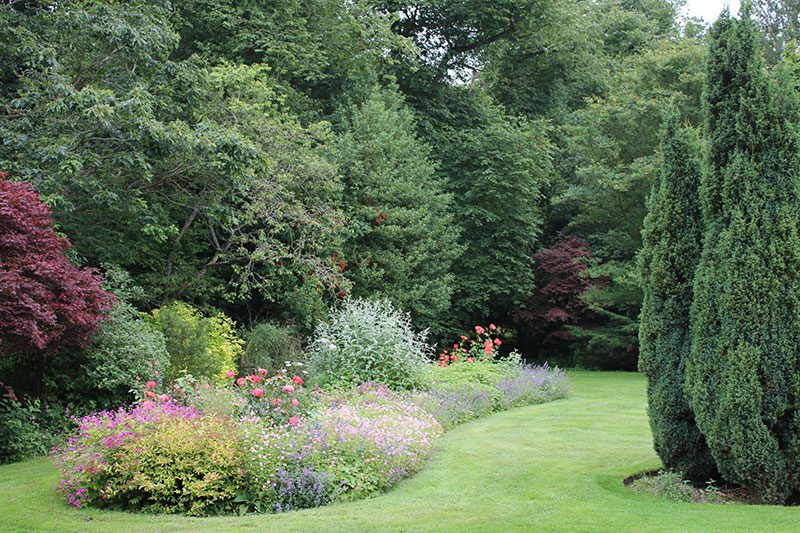 Book tickets for the gardens & grounds and special events, or a tour of The Flower Barn our weddings and events venue. There is always something to see or do whenever you visit, in our open season. The Backhouse Kitchen (no garden ticket required), offers seasonal food and drinks and welcomes well behaved dogs on the patio. Free visitor car parking when open.

Backhouse Rossie Estate in Fife provides a tranquil setting with views to the Lomond Hills. Set in a historic landscape where plants and produce are cultivated for you to enjoy during your visit or event and to take home. Relish the variety & peace on offer.